The content of this post is taken from an excellent 1997 essay by Brad. N. Haas called David Jones: The Poet's Place and the Sleeping Lord. The essay can be read in full at www.flashpointmag.com.

David Jones (1895-1974) was an Anglo-Welsh poet and artist, who I hope to discuss in more detail in a future post. The Sleeping Lord was published shortly before his death in 1974.

'The concept of the sleeping hero, ' Haas explains, 'common among many cultures, is a belief that some great leader will come again to help a culture or a nation when it is in need. For example, British legend says King Arthur will return to save the British people should they be in peril. Christ himself is a type of sleeping lord, a messiah who will return and purge the world of evil. Furthermore, the sleeping lord, upon his return, will usher in a new 'golden age', very similar to his previous mythical reign.'

Here is an extract from the poem:

Do the small black horses
grass on the hunch of his shoulders?
are the hills his couch
or is he the couchant hills?
Are the slumbering valleys
him in slumber
are the still undulations
the still limbs of him sleeping?
Is the configuration of the land
the furrowed body of the lord
are the scarred ridges
his dented greaves
do the trickling gullies
yet drain his hog-wounds?
Does the land wait the sleeping lord
or is the wasted land
the very lord who sleeps?

Haas concludes - 'The romanticism of Jones's poetry is tempered with pessimism. He wants to be hopeful, but the modern era, for Jones, seems to reject redemption. In a large fragment, The Roman Quarry, a Roman legionary, reflecting on his own time prophesies ours: 'O man, this is but a beginning - we. who reckon we suffer so late in urbs-time, who come late in time, when times have gone to the bad, are but at the initiation days of megalopolitan time - Caesar but a pallid prototype of what shall be, and what is shall pale for what is to come.' This statement forces the consideration of the inherent flaws and gradual decay of Imperial Rome - wasted and unable to redeem itself. Likewise, in The Sleeping Lord, we see our own situation, but cannot foresee our fate - are we a second Rome? or will the sleeping lord wake? By ending The Sleeping Lord in a series of questions, Jones avoids commitment to a view of the future - he becomes, not a prophet, but a poet of possibilities.' 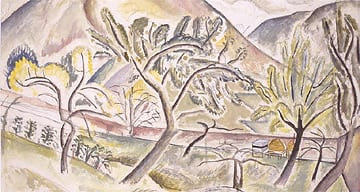 Posted by John Fitzgerald at 22:06