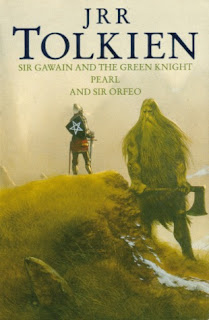 For the past forty-something years I have read a bit of Sir Gawain and the Green Knight before Christmas, especially the beginning, which is set during a Christmas feast at Arthur's court - I have pasted the first three verses below.

I particularly love the references to Britain/ Albion:

Felix Brutus establishes Britain joyfully on many broad banks, where war and waste and wonders by turns have since dwelt, and many a swift interchange of bliss and woe.... More strange things have happened in this land since these days than in any other that I know.

And the pentangle symbol:

Then they showed him the shield, that was of sheer gules, with the pentangle painted in pure gold. He took it by the baldric and cast it about his neck; and it became the hero passing fair. And why the pentangle pertains to that noble prince I mean to tell you, though it should delay me. It is a sign that Solomon set formerly as a token of truth, by its own right, for it is a figure that holds five points, and each line overlaps and locks in another; and throughout it is endless; and the English call it everywhere, as I hear, the endless knot. Therefore it suits this knight and his clear arms, forever faithful in five things, and in each of them five ways. Gawain was known for good and as refined gold, devoid of every villainy, adorned with virtues. Therefore, the new pentangle he bore on shield and coat, as the man most true of speech, and the knight gentlest of behaviour.

After the siege and the assault had ceased at Troy, the city been destroyed and burned to brands and ashes, the warrior who wrought there the trains of treason was tried for his treachery, the truest on earth.

This was Aeneas the noble; he and his high kindred afterwards conquered provinces, and became patrons of well nigh all the wealth in the West Isles. As soon as rich Romulus turns him to Rome, with great pride he at once builds that city, and names it with his own name, which it now has; Ticius turns to Tuscany and founds dwellings; Longobard raises homes in Lombardy; and, far over the French flood, Felix Brutus establishes Britain joyfully on many broad banks, where war and waste and wonders by turns have since dwelt, and many a swift interchange of bliss and woe.

And when this Britain was founded by this great hero, bold men loving strife bred therein, and many a time they wrought destruction. More strange things have happened in this land since these days than in any other that I know, but of all the British kings that built here, Arthur was ever the most courteous, as I have heard tell. Therefore, I mean to tell of an adventure in the world, which some count strange and extraordinary even among the wonders of Arthur. If ye will listen to this lay but a little while, I will tell it forthright as I heard it told in town, as it is set down in story that cannot be changed, long written in the land in true words.

This King lay royally at Camelot at Christmas tide with many fine lords, the best of men, all the rich brethren of the Round Table, with right rich revel and careless mirth. There full many heroes tourneyed betimes, jousted full gaily; then returned these gentle knights to the court to make carols. For there the feast was held full fifteen days alike with all the meat and the mirth that men could devise. Such a merry tumult, glorious to hear; joyful din by day, dancing at night. All was high joy in halls and chambers with lords and ladies as pleased them best. With all the weal in the world they dwelt there together, the most famous knights save only Christ, the loveliest ladies that ever had life, and he, the comeliest of kings, who holds the court. For all this fair company were in their prime in the hall, the happiest troop under heaven with the proudest of kings. Truly it would be hard to name anywhere so brave a band.

Translated by WE Neilson